We have all heard the old adage “You can’t teach an old dog new tricks”, but in terms of neuroplasticity, you absolutely can! Traditionally, it was thought the brain stopped developing and neural connections were unchangeable after the first few years of life. However, scientists have recently found that brain plasticity and age changes as the brain continues to reorganize itself past this so called “critical period” into adulthood and throughout life at a slower pace.

Clara Jo had relatively normal vision until falling backward on cement, which resulted in a subarachnoid hemorrhage, loss of consciousness, and hospitalization. This incident left her with a trochlear nerve palsy. The trochlear nerve (or 4th cranial nerve) is a motor nerve that innervates the superior oblique muscle of the eye. This muscle is important for a number of actions that aid in controlling eye movements, including looking downward. Clara Jo’s nerve palsy resulted in significantly weakened downward eye movement; thus, a constant vertical eye turn. This lead to symptoms including double vision, reduced depth perception, headaches, and suppression (the brain essentially ignoring input from one eye). In other words, this limited, if not completely prevented, Clara Jo from participating in her everyday life which includes reading, driving, and even just walking down the stairs.

Clara Jo came to OCVT looking to regain her life and her independence, knowing it would be a long, uphill journey. Week after week, she worked with small changes sprinkled here and there. She would ask me when she would be able to read or drive again. It was so hard for me to tell her that I didn’t know when—or even if—she would be able to go back to living her life. 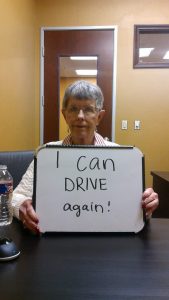 This brings us back to brain plasticity and age. Clara Jo is 79 years old and has nerve damage. We knew changes in neuroplasticity would be slow and would require consistency. For the first few months of Clara Jo’s therapy program, that is exactly what we saw: slow progress with minor changes here and there and consistently targeting the damaged nerve and neural pathways.

About four and a half months into Clara Jo’s 10-months program, she told me a few days prior to our session, she could read, drive (in her neighborhood only with her husband in the car), and her depth perception had significantly improved. I nearly jumped in the air with excitement! This was changing neuroplasticity at work. Since then, we have seen continued improvement in Clara Jo’s neuromuscular control of her eyes, decrease in suppression, and greater ability for her to live her life.

Clara Jo’s story shows us just how amazing and resilient the visual system is, as well as how consistent hard work and dedication to one’s therapy program can change lives.