From a Minnesota Vikings Ball Boy to one of the greatest NFL Wide Receivers to play the game of football, Larry Fitzgerald has left his mark on the gridiron. Amassing 15,545 yards, 1,234 receptions, 110 touchdowns, and 801 first-downs, Fitzgerald has earned his place as the 3rd best receiver on the NFL’s All-Time Receiving list. An even more impressive statistic of Fitzgerald’s is his number of dropped passes throughout his career. He has dropped fewer than 27 passes out of the 1,234 catches in his 15-year career, with multiple seasons where he has dropped 0 passes! What separates Fitzgerald from Antonio Brown, Randy Moss, or any other NFL receiver? Is it the long set of dreadlocks, speed, or legacy? It just might have something do with Vision Therapy…

I was shocked to hear that Fitzgerald has completed years and years of Vision Therapy. Larry’s grandfather, Dr. Robert Johnson, and his aunt, Dr. Stephanie Johnson-Brown, are both developmental optometrists who have guided Fitzgerald throughout his life. His grandfather diagnosed him and began the appropriate treatment at a young age. During his early years, Fitzgerald had difficulty paying attention in school, completing homework, reading, and learning. Does that sound like someone you may know? After starting VT, Larry began to excel on the field, but more importantly in the classroom, and earned a full-ride scholarship to play at The University of Pittsburgh. He broke barriers in college and after 2 years, was drafted 3rd overall in the 2004 NFL Draft by the Arizona Cardinals. Since then, he has surpassed a long list of greats to earn a spot of his own at the top while also solidifying his place as a first-ballot Hall of Fame player.

When asked about his success, Larry stated “There is definitely a connection between the vision therapy I did as a child and my performance on the field. A number of the drills in NFL Training Camp remind me of the things I did in vision therapy that helped develop my reaction time, eye-hand coordination, and visualization skills.”

As a wide receiver in high school, I knew that hand-eye coordination was key to catching the football but knew nothing about oculomotor skills, localization, eye teaming, pursuits, and the long list of skills that play a key role in sports vision therapy. Now, I appreciate the skills more than ever and wish I could rewind time to allow myself to be exposed to vision therapy to help me with school and my performance on the field.

In fact, many others have taken notice of VT and incorporate it into their training. The Toronto Raptors, Pittsburgh Steelers, St. Louis Cardinals, Denver Nuggets, and even Air Force Special Forces have VT-related machines and tools to complement their training and improve their performance.

Behind the pads, the helmet, and the jersey lies an even greater man. Fitzgerald has given back to the community and impacted many lives. The Walter Payton NFL Man of the Year award recognizes an NFL player for their excellence on and off the field. Fitzgerald was recognized for his contributions to The Larry Fitzgerald First Down Fund and the Carol Fitzgerald Memorial Fund. In honor of his mother, who lost her battle with breast cancer, Larry donates $5,000 for every touchdown he scores during October to raise money and awareness to those personally impacted by the disease. He is also the recipient of the 14th annual Arthur S. Arkush Humanitarian Award. Fitzgerald is a great player but an even greater human being. 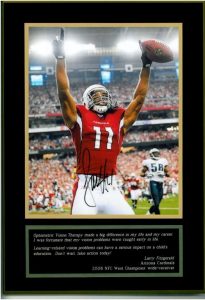 Larry Fitzgerald’s success is no secret. His impact and drive to give back to the community is what makes the world a better place. His contagious smile enlightens all around him and his selflessness, humility, and character all make him an incredible role model. He supports vision therapy and encourages all, regardless of the reason, to “Take action today!” and reach your fullest potential.

Some of the common signs of a vision-related problem are skipping or re-reading lines, poor reading comprehension, taking much longer to complete school assignments, reversing letters like b’s, d’s, p’s, and q’s, and a short attention span with reading and school work.

If you notice your child, a student, a friend, or yourself to be experiencing any of these signs or symptoms, Fitzgerald and our family here at OCVT encourage you to “take action” and consider vision therapy to assist you in reaching your fullest potential! Schedule a complementary consultation with team today!